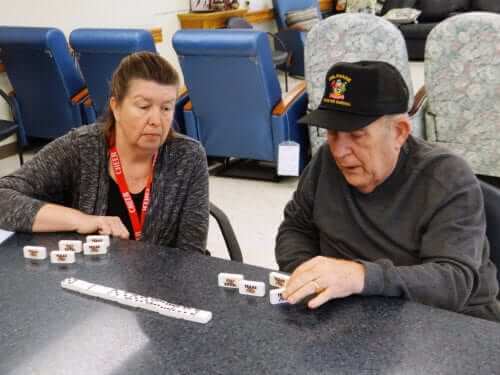 In the past decade, the demand for adult day care centers has tripled. Modern medical treatments and medicine are helping aging baby boomers live longer. As the senior population increases so does the number of them suffering with dementia and other life-altering diseases. Caring for a dementia sufferer affects not only the caregiver, but also the entire family. The demands of the disease can put emotional and financial strains on them. Adult day care centers offer an opportunity to improve the quality of life for seniors with dementia as well as their caregivers. For participants who would otherwise stay at home alone, social stimulation and recreational activities have been known to improve or maintain physical and cognitive functions.

CHEER’s Sand Hill Adult Day Program provides caregivers a break from their caregiving duties allowing them to pursue other activities while trained professionals in a secure, friendly environment care for their loved one. Loretta Feeheley of Lewes says the quality of her life increased greatly when her husband, Larry, started going to the day program in Georgetown. Larry suffered his first heart attack at age 40. In the next 30 years, he has had six more heart attacks and two strokes. He was able to recover from those health incidents and continue working as a firefighter in Glen Burnie, Md. In 2000, Larry and Loretta moved to Lewes when he accepted a position in the State Fire Marshall’s office where he worked until retirement. Then three years ago, Loretta says she began noticing dementia starting in Larry.

At first, she hired a home health aide to come to their house and assist with her husband a couple hours a day. However, that soon became a financial burden on them. Then one day their neighbor came home from the hairdresser and told Loretta about the “CHEER adult day care center in Georgetown” that she learned about while at her appointment. Loretta called the center immediately and set up an appointment for the next day.

“I had to tell Larry he was going for a job interview,” Loretta revealed. “Cindy (the center director) played along.”

CHEER Day Care Director Cindy Mitchell understands the importance of how confronting a dementia sufferer with reality can backfire because people with dementia live in the moment, even if their memories are 30 years ago.

When the couple got in the car to go home, Loretta told her husband that he had “gotten the job.”  Every day Larry got up thinking he was going to work.  CHEER transportation picked Larry up at his home every morning and brought him back in the afternoon. Loretta said at first Larry did not want to get on the bus. However, she convinced him that was the way he got to his job.  While at the Sand Hill Adult Day Center, Larry’s “job” did not consist of pulling hoses or putting out fires. Instead he spent his days doing brain fitness or creative activities in the morning and physical fitness activities in the afternoon. A nutritious lunch was served, as well as snacks. Certified nursing assistants were available to help participants with their needs, and a LPN nurse is on staff.

Larry Feeheley passed away unexpectedly in early March. Following the memorial service, his wife and children visited the Sand Hill Adult Day Program to meet the people Larry had become friends with and who made the last months of his life so much more enriching. “He came home joyful. He was never sad,” Loretta says, “and the difference in him was a tremendous help in my life.”

DANA Members: Want to share your story of impact during Nonprofit Impact Month? Send us your story (300 words or less, or short video) to Mikia Guy at [email protected] Or post your story online using #SupportDENonprofits and/or #NonprofitImpactMonth.