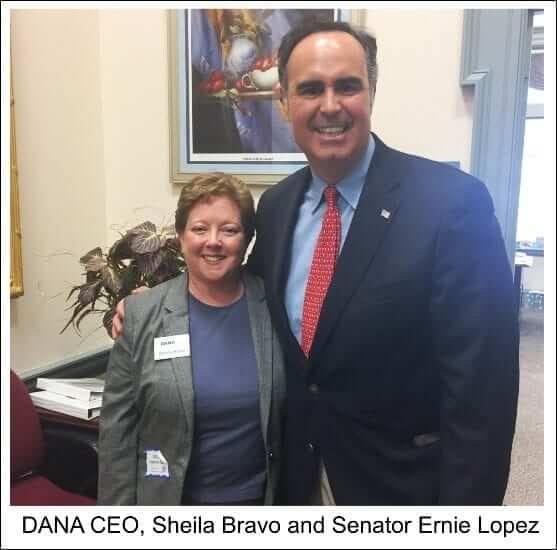 This is an update on what is happening at the State and Federal level which impact nonprofits in Delaware.  I would like to say brief – but there is so much going on!

Governor Carney issued his budget proposal back in March. Since then there have been two DEFAC reports which estimates a $385 million budget closure for Fiscal 2018.  Governor Carney has recommended a balance of expense reductions and revenue, which he refers to as shared sacrifice.

Areas which DANA has raised concerns in meetings with Senators and Representatives include the implications of losing the State charitable tax deduction, moving pass-throughs to Grant-in-Aid, and overall reductions of direct services to those who are most vulnerable in our communities. Without a change, we believe an estimated 10% of funding to nonprofits could be at risk.  We also have continued to express our desire that expense reductions and Grant-in-Aid award reductions are not done with a swift across the board cut.

This week, the Joint Finance Committee (JFC) began the budget markup process.  On Monday, they identified around $51 million worth of expenses to cut from all departments.  Of that, over $664,000 were pass-through reductions.  Contractual services and some grants were also reduced. Our higher education institutions also saw large funding reductions.   Where it was clear which agency or subsector was impacted, DANA reached out to notify. Today the JFC approved over $100 million in increased costs due to population adjustments (education/Medicaid) or priority areas (such as Education, Substance Abuse, Corrections). JFC has this week and next week to complete the budget mark up.  As DANA learns of these decisions, we will share the news.

Though Governor Carney presented several strategies to raise revenue, at this time it seems like the increase of the Corporate Franchise tax has the most momentum.  That would generate around $116 million in revenue leaving the Joint Finance Committee to develop a budget with $184 million in fewer expenses.

DANA, along with other members of the steering committee of the Delaware Revenue Solutions Coalition (DRSC) (Ability Network, Association of Fundraising Professionals, and the Delaware Arts Alliance, Delaware Grantmakers Association, Delaware Community Foundation, United Way of Delaware, and the University of Delaware) believe increases in revenue is a more favorable approach, particularly given how the nonprofit sector receives less funding than it did in 2008. Some legislation is starting to emerge in addition to the corporate franchise tax, and include raising tax levels, increase the income brackets, raising taxes on cigarettes, and extending lodging taxes to vacation rentals. The coalition is reviewing each of these proposed bills and will be providing more insight in the coming weeks on how it compares to Governor Carney’s proposals and the previous Revenue Solutions recommendations issued in 2015.

WHAT DANA IS DOING

WHAT CAN YOU DO

DANA, along with thousands of other nonprofits and religious institutions have sought to maintain the Johnson Amendment, which prohibits partisan activity of nonprofits. See What this Is.  The National Council of Nonprofits, along with many foundations have been active at preventing the repeal of this act.

A proposed Federal Budget was released yesterday, which would have catastrophic impact to many parts of the nonprofit sector.  The good news is that it is a proposal, and can be revised significantly.  We encourage you to understand how this budget impacts your organization.

Beyond hard funding cuts, of serious concern is the impact the proposed tax reform would have on charitable giving.  The Independent Sector just release a report, of which the Association of Fundraising Professionals have summarized.  Read more about it.

WHAT DANA AND YOU CAN DO

Reach out to Senator Carper, Senator Coons, and Congresswomen Blunt Rochester.  Share with them your concerns.  They will not be in session next week, so perhaps you can catch them here locally.

Thanks for reading, and stay tuned.  You are welcome to reach me directly with questions, ideas, or concerns at [email protected].